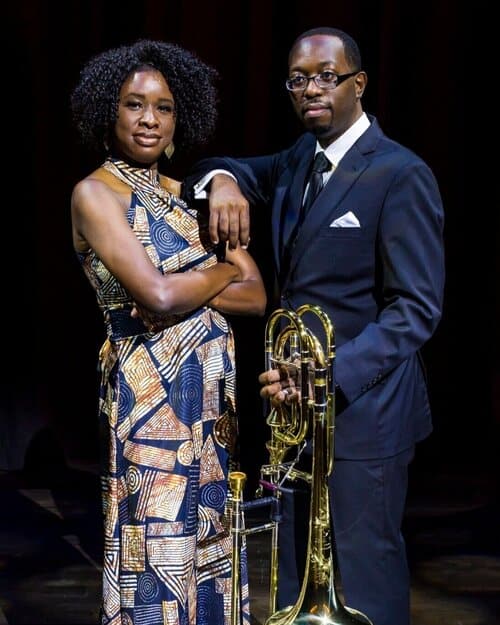 General admission.  Reserve your seats in advance or get them at the door.

Known for their fusion of classical, jazz and gospel programming, the McCain Duo (Artina and Martin) present concerts with a surprising depth of emotional contrasts. Audiences describe their performances as “breathtaking, awe-inspiring, and invigorating.” Their marriage and musical collaboration create an intimate range of tone colors and imaginative storytelling.

The McCain Duo are champions of building personal connections with composers to create a larger repertoire. Their award-winning albums Shades and Trombone Czar: The Extended Version feature commissioned works and were each honored with two Global Music Awards.

The duo has performed throughout Asia: at Mahidol University (Thailand), The University of Toronto (Canada) and Radio Television Hong Kong. US highlights include performances at the Gateways Music Festival (NY), the American Trombone Workshop (VA), and The Great American Brass Band Festival (KY). Their concerts and recordings have been broadcast on NPR’s Performance Today, CKWR Toronto, and KMFA Classical Austin.

“This project is supported in part by an award from the National Endowment for the Arts.”
Buy Tickets
group Ticketsseason Tickets
Parking
Accessibility
Box Office Policies
Help Videos
Season Brochure